It took 10 years and hundreds of thousands of dollars in piecemeal donations, but Lisa Gray-Garcia and her grassroots team of unhoused and formerly unhoused activists had finally done it.

Four new town homes stood on an East Oakland lot, just waiting to welcome their first homeless residents. But as had happened many times before, another unexpected hurdle reared up just as the group was staring down the finish line.

To comply with city rules, the activists need to move a utility box to make room for three parking spaces; an undertaking they recently found out could add $15,000 in unforeseen costs to the project.

“We’re just sitting on it,” said Gray-Garcia, who goes by “Tiny.” “Sitting on perfectly good housing because they need to house cars.”

HOMES » PAGE 5 Last year, Poor Magazine raised $350,000 and bought a second property — also in cash — a few blocks from the four town homes. ... the group plans to turn it into more homeless housing and maybe a cafe where people pay what they can. 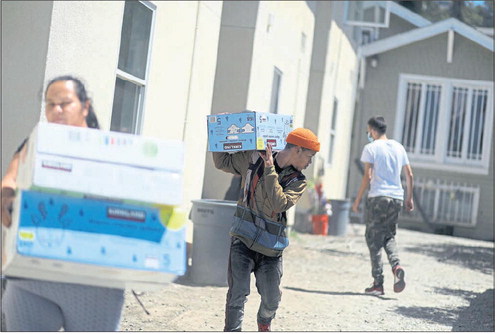 Amir Cornish, center, carries a box of diapers to be distributed to community members at a housing complex on June 24 in Oakland. Members of Poor Magazine are creating a four unit, rent-free housing complex on MacArthur Boulevard. 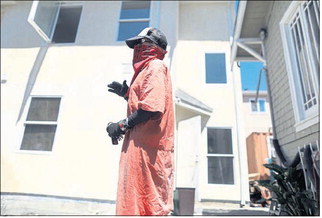 Those sorts of expenses, experts say, are all too common, and point to one of the reasons the Bay Area has such a dire affordable housing shortage: It's extremely difficult for small nonprofits to build the low-cost housing the region needs.

Gray-Garcia, co-founder of the nonprofit Poor Magazine, for years has dreamed of creating free housing built by people in poverty for people in poverty. She dubbed the pipe dream "Homefulness" and in 2011 she and her team raised enough money to buy a rundown duplex on MacArthur Boulevard for $89,000.

They paid cash because they had to - none of them had the credit to secure a mortgage. Poor Magazine fixed up the duplex and Gray-Garcia, her son and four other residents moved in. In 2013, they broke ground on four additional town homes on the property, using donated labor and materials whenever possible. The new units will house between eight and 12 more people, rentfree.

Along the way, they ran into other surprises. They needed a mountain of permits, some of which cost thousands of dollars. And with little experience, they struggled to navigate the city's planning and building rules.

"I'm sure they felt really hopeful that within a short period of time they'd be able to do great things with this land," said Janelle Orsi, co-founder of Sustainable Economies Law Center, which has been helping Poor Magazine with the project. "I don't think they ever would have imag- ined they'd hit so many barriers. And what it shows is that our laws and city procedures are not set up to support the groups that are supporting our community and creating the necessary housing." Gray-Garcia, 48, grew up homeless in Oakland, sleeping on park benches and in shelters with her mother, or in the back seat of their car - if they were lucky enough to have one at the time. They founded Poor Magazine together in 1996, launching what would eventually grow to include a radio station, youth newspaper, school and aid organization, all run by and catering to people living in poverty and in Black, brown and Indigenous communi- ties.

Some nights, Gray-Garcia and her mother parked on the street in front of a duplex in the 8000 block of MacArthur Avenue. In 2011, five years after her mother died, Gray- Garcia and her community at Poor Magazine raised the money to buy that very same duplex.

The money comes from Poor Magazine's "Solidarity Family" - a group of 80 to 100 people who donate their time, skills and money. All have been through Poor Magazine's People Skool, which teaches about historic and systemic injustices that allowed privileged groups to build generational wealth at the expense of Black, brown and Indigenous people. The school encourages people who have benefited from those systems to redistribute their wealth to people living in poverty.

It's worked surprisingly well. Last year, Poor Magazine raised $350,000 and bought a second property - also in cash - a few blocks from the four town homes. It's a vacant lot now, but the group plans to turn it into more homeless housing and maybe a cafe where people pay what they can.

For now, Poor Magazine mostly relies on donations to pay ongoing property expenses, such as utilities, taxes and maintenance. But Gray-Garcia hopes to use the cafe as an additional source of revenue. At poorpress.net, Poor Magazine also sells clothing and books written and self-published by people living in poverty.

For Paige Kirstein, who has donated more than $100,000 to Poor Magazine that she inherited from her family, the experience has been healing.

Kirstein, 31, remembers walking past encampments in San Francisco and feeling emotional and guilty at the sight of so many people struggling, but being unsure what to do with those feelings. After attending People Skool, she began donating, volunteering and building relationships with the Poor Magazine community, and led the purchase process for the organiza- tion's second property.

"This work is kind of like medicine for all of us," she said.

But it comes with struggles.

Like many cities, Oakland requires developers to include parking with new housing - the number of spaces depends on the size and zoning of the property. To convert a gravel space in front of the four MacArthur town homes into parking, Poor Magazine would have to level part of the sidewalk and move a utility box - an undertaking a technician recently said would cost at least $15,000, according to Gray-Garcia. She estimates grading and surfacing the parking lot would add another $10,000.

It's a hefty cost for a project where Gray-Garcia says the extremely low-income residents likely won't even own cars. And it comes at a time when many cities, including Berkeley and San Francisco, have done away with parking requirements. Oakland eliminated parking mandates for some buildings near transit. A bill making its way through the state legislature - Assembly Bill 1401 - would prevent cities from imposing parking requirements near train and bus routes.

In the meantime, 53-year-old Emeterio Mejia Rubalcava will continue sleeping in his van in East Oakland. Rubalcava, who recently was hospitalized with a blood infection, is one of the residents who will move into the MacArthur project when the city gives the OK. It will be the first time he's lived in a house in nine years. 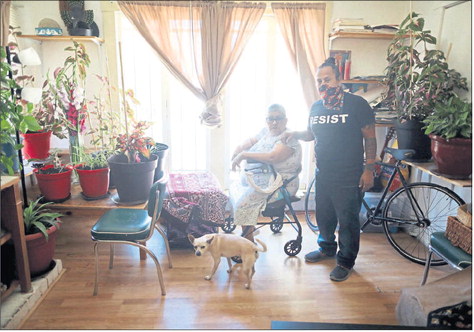