Gov. Gavin Newsom on Tuesday announced a historic plan to pour $12 billion into housing and services for homeless Californians, taking advantage of a major budget surplus to address one of the state’s most pressing — and most difficult — issues.

The two-year strategy, part of Newsom’s $100 billion economic recovery plan, aims to get tens of thousands of people off the streets and put a major dent in the homelessness crisis at a time when the governor is fighting a Republican-led effort to recall him from office.

More than 160,000 people are without housing in California, and Bay Area officials are struggling to man- 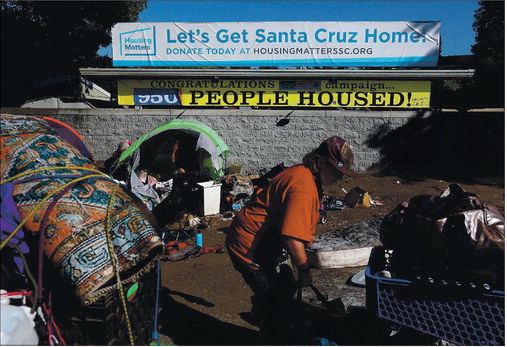 Campers along Highway 1pack their belongings as they vacate the area near River Street in Santa Cruz on Monday. The encampment was later cleared out by Caltrans. Gov. Gavin Newsom on Tuesday announced a $12billion plan to fight homelessness. 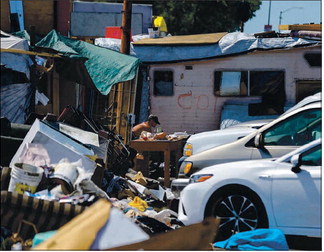 A man sits outside dwellings at a homeless encampment on East 12th Street between 16th and 18th avenues in Oakland on Tuesday.

age massive encampments and makeshift RV communities as housing and shelter resources pale in comparison to the scale of the problem.

New som's solut ion, which he described as the largest state investment to fight homelessness in U.S. history, builds on efforts launched to shelter and house people during the COVID-19 pandemic, while also focusing on families and help for people in need of mental health care.

"What we're announcing here today is truly transformative," Newsom said, speaking from a San Diego hotel that was converted into housing for homeless residents during the pandemic. "What we're announcing here today is truly unprecedented." Spending $12 billion in surplus funds on homelessness could prove to be a good political move for the governor as he prepares for a recall election, said Claremont McKenna College politics professor Jack Pitney. A recent poll showed homelessness is Bay Area residents' No. 1 concern this year - ahead of COVID-19, the economy and wild.res.

"It's a harmonic convergence of money and need. We need to do something about homelessness, and the money is there," Pitney said. "So Gavin Newsom is trying to do well by doing good." But some people want Newsom to pour even more money into the problem. Last month, a group of mayors representing California's 13 largest cities pushed for $20 billion over five years to fight homelessness - a plan backed by state Democrats. The state has no ongoing funding stream dedicated to the crisis, instead relying on piecemeal, onetime funding allocations.

"We appreciate Governor Newsom's longstanding commitment to address homelessness, and today's bold announcement," San Jose Mayor Sam Liccardo wrote in an emailed statement. "We look forward to the upcoming budget negotiations when we can build on these strong foundations with investment that can enable California's largest cities to nimbly respond with proven solutions to our homelessness crisis." Newsom is set to release a revised budget plan in the coming days, which will need to be passed by the Legislature this summer.

The governor allocated about $1 billion to fight homelessness in his 2019 and 2020 budgets.

T his year 's massive spending proposal is made possible by a projected $75.7 billion surplus for the new fiscal year, plus an additional $26 billion in federal coronavirus relief. Newsom has been revealing how he hopes to spend that surplus in bits and pieces - including the $600 stimulus payments for middle-income Californians announced Monday, and a $1.5 billion investment to clean up the state's roadways and revitalize public spaces announced Tuesday.

"It's ironic that in a state where the wealthy are doing so well that we're accumulating enough wealth to maybe deal with those who have been left out," Chicoine said. "And I very much appreciate Gov. Gavin Newsom seeing the need to do something." The cornerstone of Newsom's new homelessness plan is using $8.75 billion to create at least 46,000 new homes for unhoused Californians. Of that, $7 billion would be used to expand Homekey - the pandemic initiative that provides funding for cities and counties to convert hotels, dormitories and other buildings into homeless housing.

Last year, Homekey used $846 million in federal COVID-19 relief dollars, state funding and donations to create more than 6,000 new units of homeless housing. More than a dozen of those projects are in the Bay Area.

Abode is involved in three Santa Clara County homeless housing programs that were funded by Homekey. Another two hotels - one in Alameda County and one in Santa Cruz County - are poised to become housing once funding is secured. As Newsom pours more money into Homekey, Chicoine is hopeful Abode can help get those projects up and running.

T he state also sheltered 36,000 vulnerable unhoused Californians in hotels around the state through Project Roomkey in an effort to prevent them from catching and spreading COVID-19. As those hotel programs end, Newsom's new plan would dedicate $150 million to stabilize and rehouse Roomkey clients.

Newsom also set the ambitious goal of ending homelessness for California families within five years. His plan would invest $1.85 billion in new housing for families, $1.6 billion in rental support for families at risk of losing their homes, and $40 million in grants to local governments to address the issue.

The governor hopes to house a total of 65,000 people through this effort and prevent another 300,000 atrisk Californians from losing their homes. The plan would create at least 28,000 homes for seniors and for people struggling with behavioral health issues.

Newsom's vision also addresses homeless encampments, which have grown in size and visibility during the pandemic, causing tension in Bay Area communities and straining local officials' efforts to address health, safety and fire concerns posed by the massive camps.

Under Newsom's plan, local governments would get $50 million to help them address encampments in a "responsible and respectful way." "What's happening on our streets and sidewalks is unacceptable," Newsom said. "No one, no one should be pleased with that." Contact Marisa Kendall at 408-920-5009. 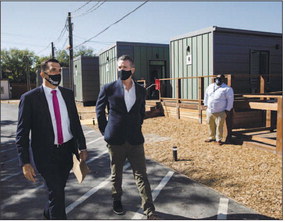